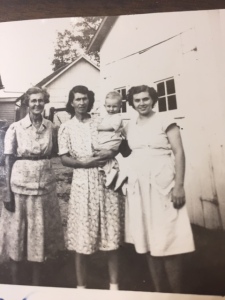 One of the benefits of house arrest 2020 is that my office is cleaner than it has been in years. I’ve found things I’ve been looking for since 2017! One of the things I rediscovered is this four-generation picture of me with three very strong women, and it got me thinking about what my parents, grandparents, and especially my great-grandparents witnessed in their lives compared to the pandemic we’re in right now.

The woman on the left in this picture is my maternal great-grandmother, Anna Mae Thomas Balthaser (1878-1961). Until I was elementary age I thought her name was “Ballplayer.” She was a tiny but mighty one, never weighed 100 pounds, but until I found this picture again at the same time I’ve been reading things about the Spanish Flu pandemic of 1918 I hadn’t really thought about the scope of the challenges her generation faced in their lifetimes.

Yes, I’ve often thought about the fact that they went from horse and buggies to the space age and other kinds of “progress” they experienced. But as I have been learning about the so called “Spanish Flu,” which I’ve learned really started in Kansas and got exported to Europe by American Troops deployed to Europe in WW I, I have thought more about other major problems my ancestors faced and overcame.

Thanks to my sister Susan’s careful genealogical research we know that my great-great grandfather Henry Balthaser Jr. moved at age 5 to Ohio with his family from Pennsylvania, and the farmhouse depicted here is a painting of their home near Amanda. The painting was done on a saw by a friend of my father and proudly hangs in my office today.

Anna’s husband Chauncy Balthaser was a Spanish War vet, which had nothing to do with the Spanish Flu. And then life got difficult. They farmed until losing their farm when he put it up as collateral for his brother to buy a farm and then worked as a carpenter for the rest of his life. When I reflected on their life span from 1870-1961 I realized they lived through a total of two world wars, the Spanish Flu, and the Great Depression. That blows my mind!

I was fortunate enough to have known both of these great-grandparents on my mother’s side. He died when I was 7 and she when I was in high school. As a kid I didn’t appreciate them as much as I should have, but I’m so glad I did know them personally because now when I think about the decades they lived through I can put faces on people I knew who lived through all of those world events and hardships. It helps put what we’re going through right now in perspective. We’ve been cooped up for a few weeks now, and my “sacrifices” don’t begin to hold a candle to what they experienced in even one of their crises. I also know that I am extremely fortunate to be in a much better place right now than the vast majority of people in the world during this pandemic.

My sister reminded me the other day of something that our great-grandmother used to say. I must admit I don’t remember this, but am glad my sister does because it speaks volumes of wisdom to me and my generation in 2020. She apparently used to say, “You can get used to hanging if you hang long enough.” And even though she’s been gone almost 60 years now, that metaphor, given all she had to hang on through, gives me hope to carry on. Thanks Grandma Ballplayer.

One thought on “Hanging On”