Earlier this year my wife and I joined another couple on an amazing five-week trip to New Zealand and Australia. We even had a bonus stop of 4 days in Tahiti on the way over. So many wonderful experiences it’s hard to even remember them all. We visited the bustling cities of Auckland, Brisbane and Sydney, took a tour of the fantastic Sydney Opera House, spent part of Ash Wednesday in awe as dolphins swam around the sail boat we were on in the harbor of Akoroa, NZ, sailed through Fiordland National Park on our cruise ship, petted some kangaroos and wallabies, saw glow worms in the Blue Mountains of Australia, toured the largest sand island in the world (Fraser Island), and spent time on the beautiful beach called the Gold Coast.

After all that I was pretty weary and getting tired of living out of a suitcase. Our trip involved 10 flights, staying in 12 hotels and a cruise ship cabin, more time zone changes than I can remember (not to mention crossing the International Date Line coming and going). We traveled over 22000 miles, had glorious weather everywhere, and thanks to our friends Barbara and Dave who did almost all of the planning and all of the driving on the left side of the road we were never lost, never had a delayed flight nor any lost luggage!! That in itself is a miracle!

But the best and most memorable part of the trip was saved till the end. All the tiredness was replaced by awe and wonder as we spent three days and two nights on Lady Elliot Island at the southern tip of The Great Barrier Reef. 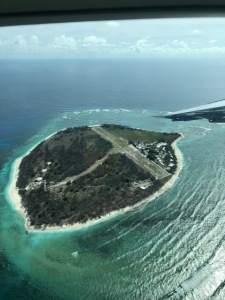 Yes we actually lived in this amazing eco resort on the reef! It’s an eco-resort because the owners are committed to stewardship of this natural wonder. 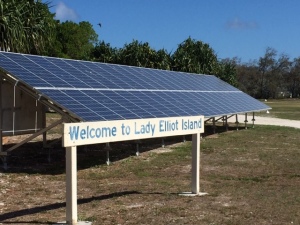 They generate 80% of their electricity from solar power and will soon increase that figure to 100%. They desalinate sea water for their guests and staff. The island itself is tiny, just long enough for a bumpy air strip, and only 80 guests are on the island at any one time. 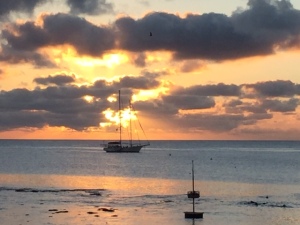 The picture here is a sunset on the west side of the island, one of two places where we could snorkel every day. The south end of the reef is in good shape still, unlike the north where rising ocean temperatures are threatening to kill it. So we rejoiced to see spectacular coral and more sea life than words can begin to do justice. We did not have an underwater camera, and on one level I regret that. But on another I am glad my encounters with huge sea turtles, hundreds of fish of every color in the rainbow and gorgeous, graceful and gigantic manta rays were unmediated by a camera lens. Those experiences are so vividly burned into my memory that I will never forget them.

The rich diversity of God’s creation, the peacefulness and majesty that appeared every time I moved from seeing nothing but water on the surface to simply putting my face in the water was transformative! God’s glory is right around us or below us in this case. All we have to do is pay attention. One day a huge sea turtle swam right under me so close I could have reached out and touched it. These big lumbering creatures on land move as gracefully as a ballerina in the primordial waters from which all life emerged

I have that sunset picture as wallpaper on my iPhone for several reasons: just for its beauty and as a reminder of the inspiring snorkeling we did there in that very water. But there’s another memory associated with that place that I have not really written or talked about much. We’ve been home over a month now, and we’ve told some family and friends about our last day snorkeling. It was memorable for a very different but equally moving reason.

We had snorkeled the day before out by the sailboat in that picture and had a marvelous time. It was the first time we saw manta rays, a real highlight of our time on the reef. The wing span of those rays is 8-10 feet, and even in a depth of 50 feet or more they dwarf everything else in the water. So of course on our final day there we wanted to relive that experience. We were in the same place that day, but what we didn’t realize while we were out in the water was that the current changed. It became so strong that we were unable to swim back into the one narrow opening in the coral where we could return to the beach.

Fortunately we were wearing life jackets so we were in no immediate danger of drowning, but no matter how hard we tried to swim toward shore we were gradually drifting further south, parallel to the coast but unable to get there. I am not usually one who prays for divine intervention in such situations, but I was just beginning to converse with Jesus about what in the world we were going to do when I saw a beautiful sight. One of the glass bottom boats from the resort had taken other snorkelers out nearby, and the captain saw we were in trouble and came over to rescue us.

He picked Diana up first and then came over toward me. When I swam over to the boat and grabbed onto its ladder nothing ever felt any better. The captain asked me if I was ok, and my reply was; “Now I am!” He probably had seen us and headed our way before I prayed, and I’m sure God had. They say God watches over animals and foolish people, right?

And now back to reality; another school shooting, number 35 of this school year. 49 years ago this week 4 students were killed at Kent Stated and this country came to a screeching halt. Now we barely notice. Our Secretary of State makes a fool of himself again by saying (to an Arctic conservation conference no less) that the arctic ice melt is “good for commerce” because it will open up new shipping lanes! I kid you not. Who does he think is going to engage in commerce with when our seaports are under water and climate refugees are overrunning the parts of the world that are left inhabitable? That kind of selfish short-sighted thinking will literally be the death of this planet, and it is of little comfort to me that I will die before the worst consequences of our stupidity are realized.

This week my grandchildren in Houston are reliving the nightmare of hurricane Harvey as their neighborhood streets and schools are once again flooded by torrential rains predicted to last the rest of the week! Does anyone in our so-called government care about these obvious impacts of climate change? No, they are all too busy trying to stay out of jail for their own lawless power grabbing behavior.

I realized this week why it has taken me so long to process our scary experience in the Great Barrier Reef waters. That experience ended well. We were rescued before our plight got really serious, but on a deeper (pun intended) level, who is going to rescue our nation and world from the morass of overwhelming problems we have created for ourselves? When nearly 50% of our population (according to latest polls 46%) supports our lying, power-grabbing president what hope is there for democracy? Many self-avowed Christians support Trump enthusiastically, even though he is on record as saying his favorite Bible verse is “An eye for and eye and a tooth for a tooth,” a verse directly vetoed by Jesus in the Sermon on the. Mount. Yes, the Jesus who says “the greatest of all is servant of all.” Can you imagine Trump trying to wrap his mind around that one?

The Sunday after our trip to Australia our church’s praise team did a contemporary song called “Oceans” that touched my jet-lagged soul. In part those lyrics say:

And I will call upon Your name
And keep my eyes above the waves
When oceans rise, my soul will rest in Your embrace
For I am Yours and You are mine

It is so hard to have water-walking faith when the storms of life are raging all around us. I had a massage this morning, which is usually a very relaxing experience. It still felt good on my body, but my mind would not relax. The hate-filled rhetoric going on in DC and in my own United Methodist denomination, fears about the physical and emotional health of my kids and grandkids in Houston battled for attention in my mind with how to pay my bills and how to keep up with my yard work and getting my taxes done (we took an extension).

And yet in spite of it all the words of “Oceans” still float in the depths of my soul:

So I will call upon Your name
And keep my eyes above the waves
When oceans rise, my soul will rest in Your embrace
For I am Yours and You are mine

Spirit lead me where my trust is without borders
Let me walk upon the waters
Wherever You would call me
Take me deeper than my feet could ever wander
And my faith will be made stronger
In the presence of my Savior.”