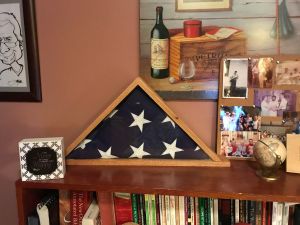 Once upon many times I have heard/read that grief comes in waves, but I have not fully realized until recently how true that is. In the past I managed to keep myself so busy doing multiple jobs, going to school till I was 48, parenting et al, you get the workaholic picture, that I didn’t allow myself to grieve that much over the deaths of my parents. I buried myself in busyness much as I learned to dive under a wave so it would not hit me full force. Thus I was able to keep grief at arm’s length.

My mom died much too young 27 years ago this month and my dad just two years ago. But now I am a stage of life where lots of friends and colleagues are dying regularly, people much to close to my own age. Combine that with living in the suspended animation of 2020 while retired and I have more time to let those waves of grief come ashore.

I had two such experiences in the last two days. Yesterday I participated in a virtual gathering of clergy from our West Ohio Annual Conference. I confess I have not attended many of these annual clergy sessions since I retired, but since I could do so this year from the comfort of my home office I decided to “attend,” if only to see how the technology worked. And it did amazingly well, and attendance was at a record high; which may lead to a new way of conferencing post-pandemic.

This clergy session is where people are approved for ordination and at the other end of the spectrum for retirement. I had forgotten that the agenda also includes recognition of clergy members who have died in the past year. I didn’t know any of the new ordinands, but I certainly new a lot of the names on the list of those who had died, including my dear friend and mentor Russell Sawmiller who I wrote about when he died earlier this year. When those names were read and prayed for, a mini-wave of grief washed over me. It made the deaths more real to see them there in print. Obituaries do the same thing for me.

This evening I got a note on Facebook from a woman I didn’t remember, and when I asked how we knew each other she said she had worked as a secretary for a short time when Russ and I worked together at Indianola UMC in Columbus, Ohio almost 50 years ago. Darla and I chatted for a few minutes on Messenger, reminiscing about the good times we remember from that chapter in our lives, and when we finished I thought “I can’t wait to tell Russ about my conversation with Darla!” And a big old wave knocked me head over heels as I remembered I can’t go tell Russ anything.

And while I’m on a roll I’ll add another mini-wave incident. I’ve had the flag from my father’s casket for over two years now and it has been in a plastic case provided by the funeral home all that time. A very good friend noticed the flag on a book case in my office recently when we were on a zoom call with a mutual friend. He said he had made wood and glass cases for flags for other people and would like to do one for me. It came via UPS yesterday, and putting the flag in the case and finding some of Dad’s WWII medals in the plastic case all brought up feelings of regret and appreciation for Dad again.

I have spent many vacations near different oceans and have experienced all kinds of waves—gentle ones that just lap at your ankles and angry ones that beat me up and tried to pull me out to sea with strong undertows. When I first thought about writing this post I was thinking more about ocean tides than waves, but I soon realized one major difference. The times for tide changes are so predictable and regular that they are published on charts that tell fisher people and beach goers, back when we could do that, exactly down to the minute when each high and low tide will be on any given day.

Waves are not predictable. They can lull one into a sense of false security, and then when least expected smack you upside the head with a big one. Grief is more like waves than tides. There are certainly times when feelings of grief can be predicted to arise—holidays, anniversaries of memorable events and of the day of death. But more often there are unpredictable waves of grief that just happen—driving by the place a loved one lived, attending the church where a service was held, hearing a particular song, looking at a picture, or just a memory that pops into one’s head uninvited. All of that is normal, and there is no right way to experience those waves or to predict how long they will last.

I knew a woman once who had been told that the normal period of grief for a spouse was two years, and she believed that as gospel. So she expected to grieve for two years, and that became a self-fulfilling prophecy for her. There is no right or wrong way to grieve. It’s great to have people come along side to share the experience when we want company, but each of us has to find our way through the grief journey in our own unique ways. As for me, I wish I had been more receptive and aware of my waves in the past, but I can’t go back and do remedial grief. I can only experience memories and emotions now in the present and welcome them with gratitude whenever they come along and actually choose to pay attention.