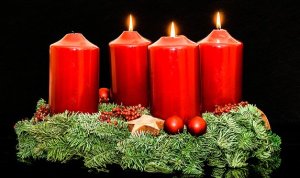 When I told my wife, Diana, that I was preaching on this text she correctly pointed out to me that this story seems strangely out of place for the 3rd Sunday of Advent. We’re still 10 days from the birth of Jesus and the lectionary text for today jumps 30 years ahead where John the Baptist is in prison. It seems chronologically out of whack, but if we take off our historical/literal glasses and dig into John’s important question we find it is very relevant for us in this Advent season 2000 years later.

The text tells us “When John heard in prison what the Messiah was doing, he sent word by his disciples and said to him, “Are you the one who is to come, or are we to wait for another?”” Why would John be asking that question? He of all people should know who Jesus is. He is the one who baptized Jesus in the Jordan River, and in that story all 3 synoptic Gospels report that after the baptism “a voice from heaven said, “This is my beloved Son, with whom I am well pleased.” That seems pretty convincing to me and not something John would have forgotten.

So why is John asking, “Are you the one?” Let’s back up a minute to the first part of that verse. It says, “When John heard in prison what the Messiah was doing…” That’s what prompts the question. John is confused as many were in Jesus’ day because Jesus wasn’t acting like the Messiah they were hoping for.

Did you ever get a Christmas gift that wasn’t what you expected or were hoping for? Kids are pretty good at showing their disappointment when they tear into a package they think contains the new X-box from Santa and find instead underwear and socks.
That kind of disappointment is at work in John’s question: “Are you the one or should we wait for another?” Jesus didn’t fulfill the Christmas wish list the oppressed Jews were hoping for. They wanted a political/military liberator and they got a suffering servant. They were hoping for Rambo and God sent Gandhi instead. They wanted a Messiah who would take to the streets and give the hated Romans their just desserts. Instead they got Jesus who ate dessert with tax collectors and sinners.

Let’s remind ourselves again of the situation and the audience Matthew was writing to. Mathew’s Gospel was written 40-50 years after Jesus’ death and resurrection, which puts it sometime after the year 70 C.E. That is a very significant date for the Jewish Christians, rather like 9/11 for us, because we know that the temple in Jerusalem was destroyed by the Romans in 70 C.E. The temple was God’s residence in their midst and now it had been reduced to a pile of rubble. That had to be a time when the Jews and their hopes for deliverance by the Messiah hit rock bottom. They were feeling like John, imprisoned and questioning their faith. So John’s question from his prison cell awaiting execution reflects the doubts of his readers, the Jews and new Christ followers sitting in the devastation of their city and their hope.

Are you the one, Jesus? Why haven’t you delivered us? It’s the question disciples of Christ have asked in every generation when suffering and despair threaten to drown our faith. Who is this Jesus, and why is there still so much injustice and suffering in our world?

The rock opera “Jesus Christ Superstar” by Andrew Lloyd Weber and Tim Rice came out when I was a senior in seminary, and I was drawn to the way it asked that same question about Jesus. The title song of that musical has Judas asking,
“Jesus Christ Superstar, Do you think you’re what they say you are?”

I talked one of my theology professors into letting me do an independent study on the theology of “Jesus Christ Superstar”. He was not a fan of rock music and very reluctant at first but finally agreed. I remember in particular one conversation we had about the scene in the musical where Jesus finally loses his cool and turns over the money changers’ tables in the temple and drives them out with a whip.

I was young and full of righteous indignation then. Now I’m old but still full of it. In 1970 I was idealistic and very impatient with the social injustices of war, racism and sexism – sound familiar? At any rate I was drawn to this angry Jesus upsetting the apple cart in the temple, but Professor Hopper cautioned me to put that incident in the context of Jesus’ total ministry. Yes, Jesus got angry a couple of times. He was human after all. But those incidents of anger are very rare and atypical of the patient, kind, compassionate and forgiving healer that Jesus was.

And that’s why John the Baptist is questioning Jesus’ Messiahship. Jesus isn’t doing things the way John would have done them. Pastor Chris reminded us last week what a wild man John was. He was a man of action, calling out the sins of the big shots of his day. He followed the examples of Amos and Micah and the other Hebrew prophets who were hell fire and brimstone preachers warning God’s people of the wrath to come if they didn’t repent of their sinful ways.

But Jesus broke the mold of the angry prophet and replaced it with the Messiah
who hangs out with the outcasts of society, who is the good shepherd who goes looking for the lost sheep instead of blaming it for wandering off. Instead of heaping guilt on the oppressed he offers forgiveness and grace to prodigal daughters and sons like you and me.

So this question is exactly what we should be asking as we prepare for Christmas. Who are you Jesus? What kind of Messiah are you really? If we don’t understand the nature of God’s incarnation in our world, if we’re looking for the wrong kind of Messiah we will miss out on the greatest gift any of us can hope for.

My heart has always been touched by a song much older than “Jesus Christ Superstar” that poses the same question. It was written during the Great Depression, another time of great suffering in our country. Robert MacGimsey was a white composer, but he wrote this song in the style of an American slave song. The version I grew up with was recorded by Mahalia Jackson, but it continues to be recorded today by other artists because it raises an important warning that we’ll miss Jesus again if he’s not what we expect. The song says,

Do we know Jesus today? Would we recognize him if he or she appeared to us in the checkout line at Kroger’s or at the food pantry? Do we treat the telemarketer or an ungrateful child as we would treat Jesus? Do we take time to pray and ask ourselves if the Jesus we want for Christmas is the one God sends to upset our values and call into question our way of life?

I had cataract surgery on both of my eyes this fall. I can now see much better than before because the old clouded lenses have been replaced by new ones. Someone has joked that we will all see 2020 come January. But the real question is will we have Messiah vision? Will you join me in praying for new spiritual lenses so we can see clearly who Jesus is and what he expects of us as his followers?

Yes, Jesus is the one! And we don’t have to wait for another because God’s Emmanuel is with us here and now every step of the way. We just need Messiah Vision so we don’t miss out on his Kingdom because of preconceived notions of what that kingdom should look like. Amen