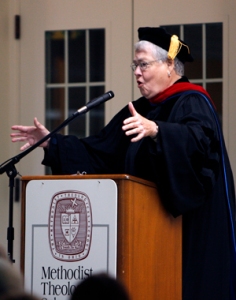 The world is a little colder today and not just because the weather outside is frightful. With thousands of people around the world I am mourning today the death of Bishop Judy Craig. When my mother and mother-in-law both died within 3 months of each other Bishop Craig went out of her way to inquire how I was doing when I saw her at a meeting. She was the most pastoral and yet genuinely prophetic human being I have ever known. 15 years later when we were colleagues at the Methodist Theological School in Ohio – I was the director of the Doctor of Ministry program and Judy was Bishop in Residence. She was scheduled to teach a course in that program one weekend and got news on Thursday that her brother had died out of state. I was also out of town and very concerned about who would teach that course, but when I reached Judy on the phone there was not one question about it. She was at peace with human mortality and knew there was a time for mourning, but it would be after she taught that course.

The last time I saw Judy was at a special dinner in her honor at the seminary where a scholarship was established in her honor. She had her portable oxygen with her, her physical being was failing; but it was oh so very well with her soul. When I waited my turn in line to greet her after the dinner I bent down to speak to her and in true Judy Craig style she complained about our making all this fuss over her. But then she did something I’ll never forget. She pulled me down close to her and kissed me on the cheek; and now I will always know what the kiss of peace is.

She was a rebel and a trailblazer for any and all who were marginalized, but she also had spent many years in local church ministry where she learned the art and necessity of balancing pastoral and prophetic ministry. When she gave the best commencement address I’ve ever heard at MTSO in May 2008 she told this story that captures the very essence of her spirit which lives on in all of us who were blessed to be touched by her life.

“I’m reminded of the story of a farmer who hired a builder to come and use the finest materials and build a beautiful barn. Then the farmer went out and got on his tractor and bulldozed down the old barn.

And the next day there was a storm threatening, but the farmer went into town anyway. And the storm hit, and the sleet was going sideways, and as he drove home, he was smiling to himself because he thought of his cattle in that nice, warm barn. He’d left the doors open so they could get in.

But when the farmer got home, he found the new barn empty. He went back out in the sleet and the wind, leaned into it as he walked toward where the old barn had been. And there, huddled in the wind and the sleet, were the cattle – inside the foundation of the old barn.

Recognize that? You’ll encounter people like that. Just then, dig out your patience and your modeling and your best invitational self. Pull out those great biblical illustrations about God’s future and the wonderful stories of church history. And then go and stand with those miserable cattle in that wind and love them anyway until they will finally begin to follow you into the new barn.”

Judy, you will always give us compassion to love because you so loved us.

3 thoughts on “A Tribute to Bishop Judy Craig”