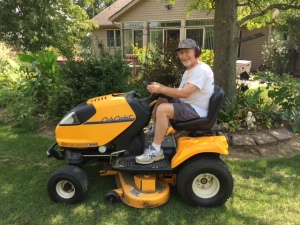 I do some of my best thinking on my lawn tractor. Mowing is therapeutic for me and much cheaper than paying a therapist. Mowing calms my mind because it’s nice to tune out the rest of the world and do a practical task where I can see concrete evidence of progress and know when I’m finished. Most of life is not that simple. But this summer I need a bigger lawn.

Last week, for example, after listening to all the news and commentary about the violence in Charlottesville that I could stand I fled to my trusty Cub Cadet and spent two hours mowing and raking our acre of grass. The wet summer has been good for growing grass and other things, but it feels this summer that I am not just mowing but bailing hay. Many thoughts went through my mind as I tried to understand what’s going on in America and what my response should be. The following thoughts don’t necessarily hang together well, and some have been pushed off the front page by new crises du jour, but believing I’m not alone in the quandary of if and how to respond to current events I decided to share them in hopes they will be of some benefit beyond my own self-therapy.

I am always amused and fascinated by irony, and two things about the recent crisis about American racism strike me as ironic. First I am chuckling over the fact that President Trump’s responses to Charlottesville have done more to create a bi-partisan agreement on an important issue than anything else that we’ve seen in years. Republicans and Democrats haven’t been able to agree on anything of significance for at least a decade, and yet in the last week people from both sides of the aisle in Congress have made their voices heard condemning bigotry and hate groups by name and criticizing the president for not doing so. Both of my Ohio senators, one Democrat and the other Republican issued very similar statements, along with our Republican governor. Now we’ll see if all that bi-partisan rhetoric leads to any concrete action.

My other ironic thought is a bit more bizarre, I hope. Wouldn’t it be the height of historical irony that World War III could involve Germany and other democracies coming over here to save us from our own Nazis? Let’s pray we can get our own house in order and never see that day come. The positive side of this crisis is that it is forcing many white Americans to really examine our own complicity in the racism that has plagued our nation for 400 years. The strategy to just ignore our dirty laundry will no longer work. The hate mongers marching through Charlottesville with their torches and hateful slogans have exposed this cancer to the world. The question now is will revealing this dark underbelly of America allow us to cure it or will it metastasize and spread like a wildfire fed by Santa Anna winds?

One of my more dire and paranoid reflections is that this President is so desperate to preserve his power that he might intentionally or accidentally start a civil war or a nuclear war not only to distract us from the Russian investigation and his moral failures but as a way to declare martial law and postpone any elections that would almost certainly remove him from office. Unlikely? Paranoid? Cynical? Perhaps all of the above, but nothing this president has done so far has been normal or expected. Many of my friends who voted for Trump did so with the belief that our system of checks and balances would control any flaws in Donald Trump. We may soon find out. Let’s hope they were right.

150 years ago Lincoln uttered those memorable words at Gettysburg, “We are now engaged in a great Civil War to see whether that nation or any nation so conceived and dedicated can long endure.” That Civil War has obviously not really ended. Our sisters and brothers of color have known that all along. Now we all have a new opportunity to face the reality of racism in ourselves and in our nation. How we choose to respond will determine the answer to Lincoln’s question. We are at a critical juncture in the history of our nation that reminds me of the challenge Joshua put to the Hebrews long ago at a similar turning point in their history. Joshua knew it was time to fish or cut bait, to recommit to the Covenant with the God who had delivered them from slavery in Egypt just as it is time for America to search deeply into our souls and recommit to the ideals of “liberty and justice for all” upon which our nation was founded and for which thousands have lived and died to preserve.

Here’s what Joshua said to the Hebrews. May those with ears to hear do so still today. “Now therefore revere the Lord, and serve him in sincerity and in faithfulness; put away the gods that your ancestors served beyond the River and in Egypt, and serve the Lord. Now if you are unwilling to serve the Lord, choose this day whom you will serve, whether the gods your ancestors served in the region beyond the River or the gods of the Amorites in whose land you are living; but as for me and my household, we will serve the Lord.” (Joshua 24:14-15 NRSV)

One thought on “Mower Musings: Gettysburg to Charlottesville and Beyond”